The rational storage of biological data is an ever-present issue. It is not only about large data sizes, but also about the requirement of simultaneous access to them by several scientists. For instance, a few researchers from a lab may need to work on the same data, like a set of primers or data produced by sequencing. That information has to be updated and synchronized between different users and kept in a common storage. That is what UGENE Shared Database is intended for. 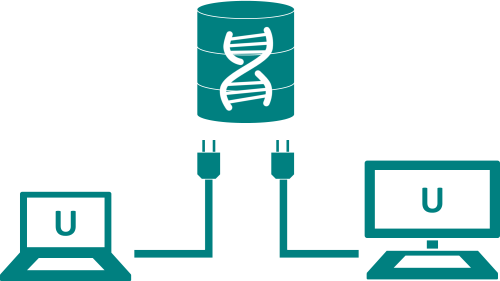 To start sharing data via UGENE you need to deploy a public database server. MySQL servers are currently supported. See this paragraph for details about the required server configuration.

After that any UGENE user (who knows the correct login/password, however) can connect to the database. The connected database is shown in the Project View as a document exactly the same way as if the data were located on the local computer.

All UGENE instances connected to a database constantly monitors the state of the database and shows changes, made by other users.

UGENE accesses large remote data, such as NGS assemblies, so that only a viewed part of them is loaded to a client computer. So, if you store the assembly data on a server, the data can be browsed in the UGENE Assembly Browser on a local computer almost instantly, without the need to copy the data on the computer or use the hard disk space.

For details see the documentation below: