Each base of a consensus sequence is calculated as a function of the corresponding column bases. There are different methods to calculate the consensus. Each method reveals unique biological properties of the aligned sequences. The Alignment Editor allows switching between different consensus modes. To switch the consensus mode go to the General tab of the Options Panel or activate the context menu (using the right mouse button) or the Actions menu and select the Consensus mode item and General tab will be opened automatically: 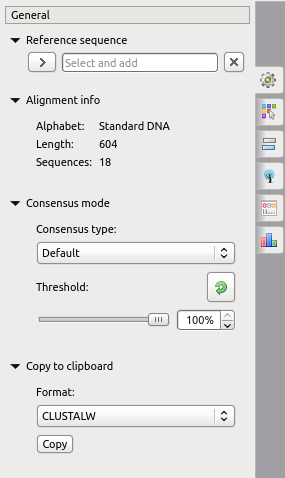 There are several consensus modes:

Also the General tab shows the general information about an alignment and allows one to set up a reference sequence. The following chapter describes how to export a consensus sequence: